Mysteries :  The Official GrahamHancock.com forums
For serious discussion of the controversies, approaches and enigmas surrounding the origins and development of the human species and of human civilization. (NB: for more ‘out there’ posts we point you in the direction of the ‘Paranormal & Supernatural’ Message Board).
Welcome! Log In• Register
Go to: Forum Home•Board•New Topic•Search
If Pyramids are not Tombs, then where are the Pharaohs?
Author: Thanos5150 ()
Date: July 24, 2017 01:04AM
Egyptology holds that pyramids were built as tombs for the pharaohs, yet no royal burial has ever been found in one. This is not to mean just the "body" of the pharaohs are missing, but all the material funerary goods and even the artistic and written testament right off the walls as well. Though I have yet to hear a convincing argument as to why the walls would be completely bare, a-typical of all the tombs surrounding the pyramids and abhorrent to their religion regardless, as far as the pharaoh's remains and funerary goods it is said these were all stolen by tomb robbers often shortly after the body was interred and the tomb closed, mere years in some cases. Yet this too makes little sense as what this means is that each pharaoh was just as dumb as the last, even robbing their predecessors themselves, only to repeat the same mistake pyramid after pyramid knowing full well their tomb would also be robbed just like every single pyramid building pharaoh before them. No, this seems quite unlikely. About as unlikely as every pyrmaid being picked clean by tomb robbers leaving no trace of royal burial even in those whose sealed sarcophagi were opened first in modern times only to be found completely empty.

These, among other reasons spoke of in these forums often, like Sneferu building 3 "tombs" despite no evidence of any royal burial in any of them-not even a sarcophagus, has lead many to the conclusion, including myself, that the pyramids were not built as tombs. As to what they were constructed for, there are many theories offered ranging from cenotaphs to microwave beam generators, yet regardless of their true purpose we are still left with the question-if the pyramids were not built as tombs, then where are the pharaohs? They had to be buried somewhere, right? There are 37 pharaohs ascribed major pyramids between the first, Djoser of the 3rd Dynasty, and the last, Ahmose I, of the 18th Dynasty. A few, like Sneferu, have been credited with building more than one, and many pharaohs of this period, namely after the 6th Dynasty, didn't build pyramids at all. 37 pharaohs yet not one trace of a royal burial left behind by robbers? Even the unopened ones? 37 pharaohs in a row making the same dumb mistake over and over again knowing full well they would be robbed?

Or worse still, if we take Giza for example- there are hundreds of mastaba tombs that surround the pyramids. Cemeteries full. There is no doubt that despite the function of the pyramids that they were still deemed by the people something to be buried next to generation after generation. Within these mastabas, however, literally thousands of artifacts have been found by modern explorers and archeologists, veritable treasure troves, yet the pyramids themselves, all of the pyramids for that matter, were completely empty. 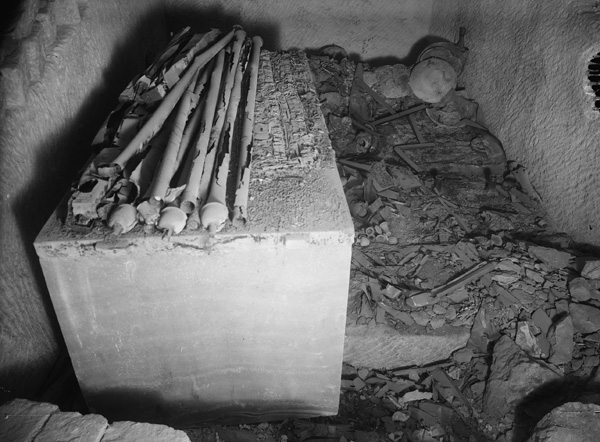 These are certainly the more spectacular finds, yet tomb after tomb after tomb at Giza, thousands of artifacts, which says nothing of all of the artwork and writing covering their walls missing from pyramids as well, yet robbers were able to completely clean out the pyramids leaving no trace of a royal burial, supposedly fortresses built to prevent this very thing, yet so many of the tombs surrounding these pyramids, easy picking by comparison, contained at least some kind of funerary artifacts to be found nearly 5,000yrs later? And not one out the 37 pharaohs, regardless of how many pyramids they built, ever figured out how to protect their very reason for living, not to mention their subjects, which was to protect their dead body ensuring their passage in the afterlife? No.

To quote myself from HERE:

The precedent pharaohs being buried at separate locations from their associated monumental architecture is firmly established from the 1st Dynasty at Ummm al Qa'ab/Shunet el-Zebib, extending through the 2nd Dynasty, further complicated by the corresponding tombs of several of these pharaohs at Saqqara.

The pharaoh directly before Khufu, Sneferu, is credited with building 3 pyramids, which none contain sarcophagi, and is also credited as builder of the massive mastabas at Meidum, which the largest, mastaba 17, has been suggested by some to have been his actual tomb yet was left unclaimed and as a result "unfinished".

Djoser, builder of the stepped pyramid at Saqqara, is also credited with the building of at least one of the massive mastabas at Beit Khallaf, the other of the largest is loosely credited to the 3rd Dynasty pharaoh Sanakht, and has been suggested this was his actual tomb as well yet it too is "unclaimed" and as such "unfinished".

Outside of the pyramids, the mastabas in question at Meidum and Beit Khallaf are some of the largest if not the largest largest monumental construction in Egypt of the period with the only parallel in scope being Shunet el Zebib. The point being, they are constructions fit only for a king.

All things considered, based on tradition going back to the beginnings of Dynastic Egypt, the separation of a pharaoh's monumental architecture from their tombs, monumental architecture which their subjects were buried next to apart from the pharaohs actual tomb, not to mention as well having tombs in both upper and lower Egypt, like Senwosret III, like Djoser at Saqarra and Beit Khallaf (just north of Abydos), not to mention Sneferu being credited with building 3 pyramids no less, is nothing new which strongly implies Senwosret III's is not the exception but rather the continuation of a tradition that originated with the first kings of Egypt.

So, again-where are the pharaohs? It would appear that in fact they were not the stupidest people to ever grace the ancient world repeating the same unimaginably costly, on all levels, of mistakes 37 times in a row and were actually very very smart at hiding their tombs, so much so that we have yet to find them nearly 5,000yrs after the fact. Are their tombs under the pyramids? Are they like Senwosret III at another location entirely even perhaps at the home of the 1st kings near Abydos? Are they even buried in Egypt? Crazy, huh, but we are still left with the question-if the pyramids are not tombs, then where are the pharaohs?