Lol. Ain't that the truth.


> It was the same with Primitive opposed to
> primitivism
>
> Blinkered logic. if you don't look you don't
> see.

Time and again we are told, at every turn, the OLC is responsible for all igneous rock and/or large blocks and statues in Egypt no matter when they are attributed in AE chronology for the simple reason there is no evidence at any point in their history of having the tools or ability necessary to do so.

Meaning, there is no fundamental difference between this found in the OK: 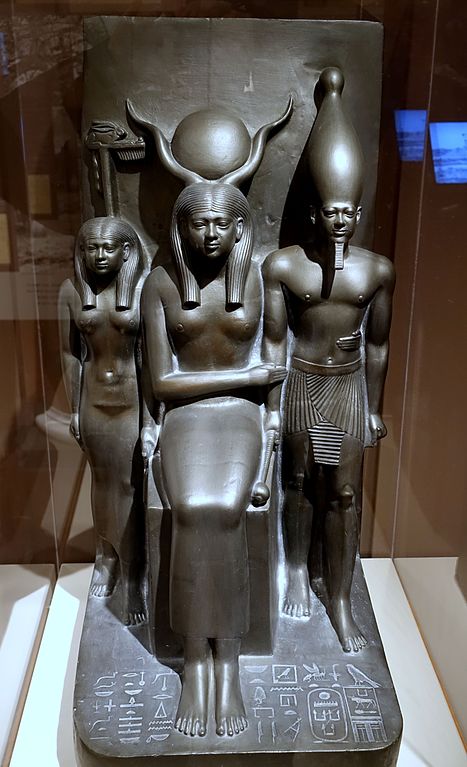 And this found in the NK:

They either had the tools to do it or they did not.

We are also told, ad nauseum, we have "no idea" how old this culture is, which includes the statues, and may in fact be "millions" of years old. In fact, as we are told, we have no idea even what species of human they were or if they were even human at all.

Thanos posts pictographic evidence of modern mammals depicted in the igneous rock statuary of the OLC including domesticated animals, only found in the anthropological record congruous with the various stages of modern human and mammalian development. The depiction of these animals, which only existed after certain times, some only since the modern human domestication of animals, ergo dates the creation of the statuary.

Thanos also posts pictures, from the OK among others, of statues depicting modern human beings.

"Photographic evidence" now translates to the at times "loved", but now derogatory, "photo bombs". None of the Origyptianites can understand why Thanos would post such things. Amazingly Thanos even conjures why he would do such a thing:

Do you think the LC had domesticated dogs millions of years ago? Cats? Cows? I wonder if knowing when these animals first appeared in the anthropological record might give us some clue as to when the LC lived. Yet you just can't figure out how anyone might have a clue when these people lived and to you could just as easily have been tens of thousands if not hundreds of millions of years ago.


And asks the question:

You believe they were another species of human, or perhaps non-human-can you explain what it is about their anatomy that leads you to this conclusion? For example, what is it about these two that suggest to you they are "non-human" or a different species of human: Thanos, with all your photo bombs, insultas, sarcasm, and arrogance, you still haven't lifted a finger to prove when any of that work was actually done. You may think you did, but you really didn't. You seem to simply be making huge assumptions that are entangled in Manetho's timeline.

"Have no idea why you throw domesticated animals in your stew. Has nothing to do with OK. Everything except the owl looks typical. Why on earth do you think we include ALL statues as an LC legacy?"

[Note:I did not post a picture of an owl. It is a hawk. The hawk of Horus found throughout 3,000yrs of AE history.]

"But since there aren't pics to post of it, you and your peanut gallery will not understand the point."

"And they [alts] will not agree with you no matter how many photo bombs you do. And you will not sway them with pics from different time periods."

"So why should anyone give evidence outside of the monuments? Because YOU think so?"

The statues tell us two things:
1) They were created by modern humans and/or non-humans or another species of human that just so happened to look exactly like modern humans in every anotomical way.

2) They were made at a time when these animals existed, for example the domesticated cow:

A genetic study of cattle has claimed that all modern domesticated bovines are descended from a single herd of wild ox, which lived 10,500 years ago.

A team of geneticists from the National Museum of Natural History in France, the University of Mainz in Germany, and UCL in the UK excavated the bones of domestic cattle on archaeological sites in Iran, and then compared those to modern cows. They looked at how differences in DNA sequences could have arisen under different population history scenarios, modeled in computer simulations.

The team found that the differences that show up between the two populations could only have arisen if a relatively small number of animals — approximately 80 — had been domesticated from a now-extinct species of wild ox, known as aurochs, which roamed across Europe and Asia.

If this animal did not exist prior to c. 8,500BC, which is also confirmed archaeologically as domesticated cattle are not physically found prior to this period either, we can conclude at the very least this statue, among many others depicting this animal, was made after this time, therefore giving us at least "some idea" when the culture that made this statue existed. Therefore, we are left with two choices:

1) The AE did in fact have the ability to make such statuary regardless of whether we do not find the tools and materials some believe were required to do so, which further tells us the lack of such tools has nothing to do with age.

2) The OLC, being the only ones who were able to create such statuary, existed sometime directly before and after the period of c. 8,500BC.