> >
> > There is nothing seen at G3 that contradicts a
> > similar configuration.

> I understand your opinion.
>
> And based on the photos you've posted of G3, the
> gash suggests a substructure that's comprised of
> multiple steps, one of which seems to be visible
> in its full height about midway up the height of
> G3, and that step appears to be only about 10
> courses high and therefore doesn't resemble
> Meidum's exposed vertical-walled core tower, in my
> opinion.
>
> The only way I can reconcile the G3 gash with your
> hypothesis is to suggest that the gash shows a
> cross-section through the outermost layer which
> forms the flat inclined outer faces, it reveals an
> inner step pyramid perhaps with an accretion
> construction, all of which supports the notion
> that there is a central, as yet unexposed core
> tower. But again, it's speculation.

The purpose of this thread is ultimately to understand the basic architecture of pyramids which in turn should lead to a better path as to how they were built. We have enough direct observable evidence from enough pyramids spanning multiple dynasties to at the very least have confidence the standard model was to build a stepped core of one kind or another then add a true pyramid layer against it. The idea pyramids were built horizontally course by course deck by deck is not valid and whatever construction models are devised should revolve around a stepped core. While there are variations to this theme, namely what kind of stepped core was used and/or how the TP layer was added, the evidence strongly implies the great pyramids were built this way as well in which Meidum and G3 would be prime examples. Circumstantial evidence suggests G1 was built with a stepped core and the riddle of the BP I have suggested is not some nonsense change in plans but rather an early attempt to add a TP layer to a stepped, perhaps tower, core:

As far as the tower core model goes, I am suggesting that stepped cores are in reality built around a central tower core like Meidum (which has steps itself), not stacking one "mastaba" on top of eachother course by course step by step. As far as Meidum is concerned, I concede the fact, however, it's tower core being a finished product unto itself may be unique as I have yet to see any direct evidence of any other pyramid with a core finished in this way. If true, we are left to wonder why this is. There are elements of G3 that are suggestive the pyramid we see today was built around an earlier structure which the steps we see behind the TP layer I suggest are part of this conversion process and not the original structure which is possible may have been a finished tower core like Meidum:

He shows the steps that we see, but also, if we draw a line straight down from the top step face it leads directly to the opening of the original entrance. If we superimpose Medium over this line it is easy to imagine a tower core being the original, if not required, structure: 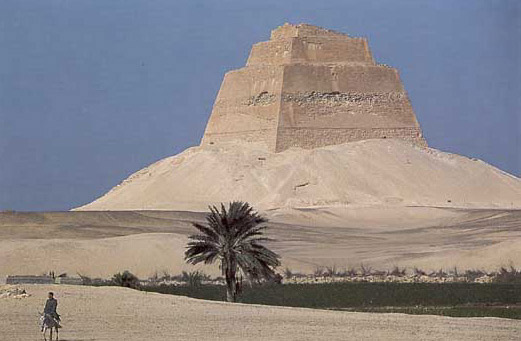