Mysteries :  The Official GrahamHancock.com forums
For serious discussion of the controversies, approaches and enigmas surrounding the origins and development of the human species and of human civilization. (NB: for more ‘out there’ posts we point you in the direction of the ‘Paranormal & Supernatural’ Message Board).
Welcome! Log In• Register
Go to: Forum Home•Board•New Topic•Search
The Deffufas: Mud Brick Ziggurat Like Structures of Ancient Nubia
Author: Thanos5150 ()
Date: September 07, 2016 07:36PM
The Forgotten Kingdom of Kerma and Its Incredible Deffufas

The first settlement in Kerma can be traced back to the 4th millennium BC. This phase has been called ‘Pre-Kerma’. The Kingdom of Kerma, however, was established around 2500 BC. The timeline of this kingdom has been divided into three phases – Ancient / Early Kerma (around 2500 BC – 2050 BC), Middle Kerma (around 2050 BC – 1750 BC) and Classic Kerma (around 1750 BC – 1500 BC). Around 1500 BC, this Nubian kingdom came to an end, as it was during this period of time that the Egyptian pharaoh, Thutmosis I, defeated it and brought its territories under Egyptian rule.

The word Deffufa descends from either the Nubian term for mud-brick building, or from the Arabic word Daffa meaning "mass" or "pile". Although the religious nature of the Deffufas can not be doubted, their precise function has not been determined. While some regard the buildings as temples, others see them as royal residences. Whatever their function might have been, their architectures are unparalleled elsewhere in the ancient world and their importance to the people of Kerma is comparable to that of the Ziggurat to the people of Sumer. So far three Deffufas have been discovered; the Western Deffufa, which is the largest and the best preserved; the Eastern; and a third little explored Deffufa. 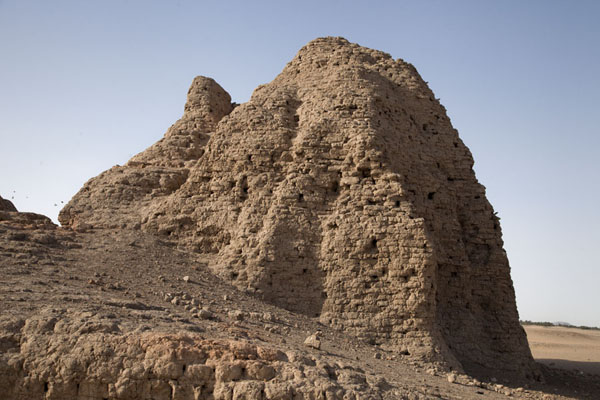 Interesting to note this deffufa is surrounded by a cemetery of at least 30,000 graves and the Western around 1,000.

Doing a cursory search, through the Kerma culture was around since sometime in the 4th millennium BC it was not considered a "kingdom" until 2500BC. How these dates were arrived at I do not know but the latter in particular I am certainly interested to find out. This is a good lead: NUBIAN PHARAOHS AND MEROITIC KINGS: THE KINGDOM OF KUSH

Regarding the deffufas, dating seems to loosely fall between 2500-1700BC with consensus c. 2,000BC. One source nebulously suggests as early as 3,000BC of which regardless there is evidence of organized urban settlements there dating to at least this old. Ziggurats as a rule were built on over and over again for centuries, which makes me wonder if the foundations of the deffufas may in fact predate 2,000BC if not date to 3,000BC or earlier. Quite interesting if they did.